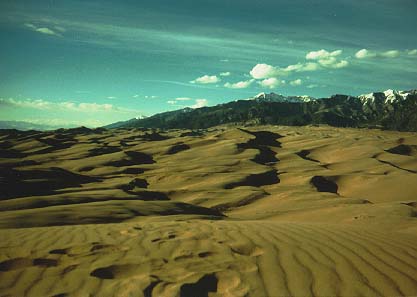 I first visited the sand dunes in southern Colorado during the spring break of my sophomore year in college with Matt Perry and Dave Burns.  The year was 1996. The place was a National Monument at that time (as opposed to its recent designation as a National Park), so there was no entrance fee and no people. Of course, the lack of people could be explained by the fact it was March, which is not a month in the San Luis Valley with weather known to entice large groups of tourists into the out of doors. Nevertheless, we had a wonderful trip.  The sand dunes just don't seem to belong in the mountain region of southern Colorado, but then I guess that's what makes them so special. We camped near them in a designated campground for two nights and spent our days on the dunes: we hiked, ran up dunes, ran down dunes, picnicked on dunes and even flew kites on top of dunes.  Running down the dunes is a kick, because you can just jump out horizontally as far as you like from the slope, and you'll come down in the soft sand some twenty feet down the slope.  No worries.  It's like an outdoor padded cell. You can hardly conceive of doing anything to hurt yourself. Running up the dunes, owing to gravity, isn't as fun.  The kites were a big thrill, until Matt diabolically maneuvered his kite so as to sever my kite's string.  He says it was an accident. It took me half an hour my kite. Matt snored alot, and the sleeping bag that I had bought at Savers for the trip got soaked because it touched the tent fabric during the dewy night.  We had a good time cooking burgers on the open fire at after dark, examining constellations. I remember distinctly it was one of the first times in my life I admired Orion, mainly because it was one of the first times in my life I had been far enough away from city lights to see it. 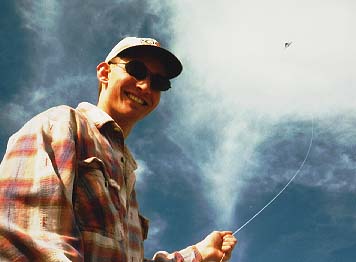 Here I am flying my Buzz Lightyear kite. 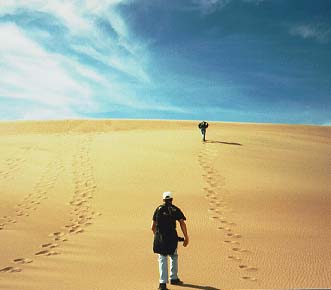 "The man on the right eats Power Bar."  Dave gains a quick advantage over Matt up the first dune. 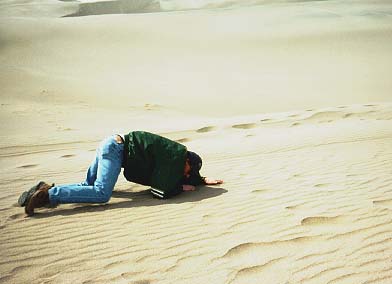 But he soon tires under the withering desert sun. 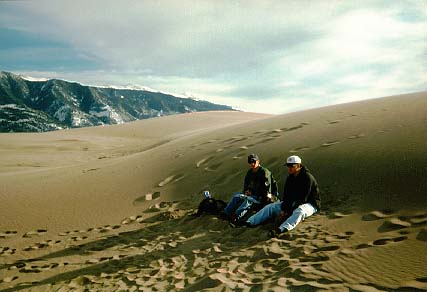 Dave and Matt after lunch.