Location: Roosovelt National Forest/Colorado State Forest
Maps: USGS 7.5' Quad: Clark Peak; Trails Illustrated 1:40K: Poudre River / Cameron Pass #112.
Access: From Ted's Place at the Poudre Canyon entrance, drive 57.6 miles to the Cameron Pass parking area. Trail begins at the parking area.
Trailhead: NAD83 zone 13 424314e 4485929n  Elev: 10,270'
Fees: None
Dogs: No posted regulations. I let mine run free.
Trail: Hard to find in winter, but it's there in summer. The peaks are obvious, and require little skill in navigating to (go up), although it is a steep, 1500 ft climb.
Weather: COLD! Just kidding, check out current and recent conditions from the NOAA  Also, check a local forecast from the NWS

In October of 2001 I was working part-time at CSU with the good fortune of being able to pick my own hours. I only got paid for the hours I actually worked, however, so if I planned on going hiking during the week, I was keen to the fact that I had better make it count. Thus it was that I felt a little cheated when, halfway up to Cameron Pass, sunrise revealed an unbroken ceiling of gray clouds from horizon to horizon. Since I was already so far up the canyon and Frank had already suffered through an hour of agonizing car-ride in anticipation of great hiking fun, I figured I would at least get up a little further and let the little guy out for some good snow frolicking. So I drove on through the gray morning and watched for ice patches on the road. A light fog lay in the hollows and meadows near the road. I watched in vain for sunlight to greet us, but none came. The sky was a depthless, textureless shade of gray.

We reached Cameron Pass at about 8 and piled out of the car. Thick snow lay on the ground and Frank galloped lovingly through the white powder. He always seems to derive extra energy from snowfall and this was no exception. A squirrel chattered at Frank from the tip top of a spruce tree. Frank jumped up the trunk, forgetting in his bloodlust that he couldnt climb trees. I packed my bag with treats and appropriate warm clothing (all that I had brought came along) and we followed footprints in the snow leading away into the forest to the north. 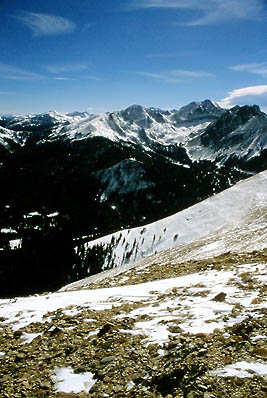 I never hiked Cameron Pass area trails before so I was not quite sure where the trail lay. The snow was relatively recent, so the footprints that led into the forest stopped after thirty yards and no others were present beyond that point. I stopped and studied my map and the surrounding terrain. From the parking lot, I could see three tall snow-capped peaks to the west, which are called collectively the Diamond Peaks. This was my destination. In the deeps of the forest, with eighty foot spruces towering around me I could find no trace of those snow capped peaks, but I figured they were somewhere off to the left and I probably couldnt miss them if I tried so I just started into the deep snow and up through the trees. The sky was dark and foreboding and I was having serious doubts about the entire venture. Frank was feeling energetic and pranced through the snow like a little elf dog or a deer. Always he kept his nose right above the snow surface, skimming along hoping to pick up the wild scent of some four legged forest creature.

I slogged my way up the steep slope and rued my forgetfulness at not bringing gaiters to keep the snow out of my boots. At some points the steepness necessitated using the numerous tree trunks as support. I created my own switchbacks as I trudged up. I stopped after a bit and looked behind where only an endless procession of dark trunks lay. In all directions lay a monotonous pattern of spruce and fir trunks, dark under the morning clouds. I almost turned back, thinking how dumb I would look if I died in a snowstorm on top of a 12,000 ft mountain. Just then I caught sight of a tiny insignificant sliver of electric blue Colorado sky peeking out above the horizon. The wind was from the west and I began to hope that the end of the cloud cover was in sight, and moving away (judging from the wind..moving away fast). So I continued on up the slope and through the trees, trying to keep track of wild roving dog as I went.  The sliver of blue up ahead grew so that presently there could be no mistaking this for a simple break in the clouds.

The trees started showing signs of petering out and relinquishing their domination to scrubby mahoganies and wildflowers. I was able to see the vast slopes of alpine tundra before me and the sun came out to shine on the snow for good. Here and there pockets of gnarled treeline firs still held a little ground, but by and large the land was a smooth sheet of snow powder, so cold it scattered like sugar crystals before my feet. 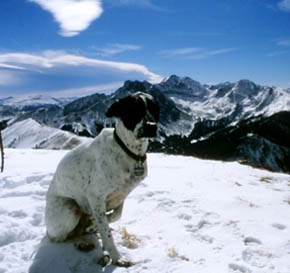 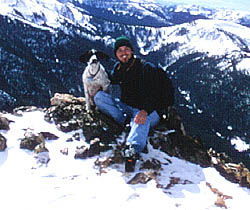 A flock of white ptarmigan scattered in a flurry of robust wing beating and calling just yards ahead of me. They were so well camouflaged with their white feathers and brown speckles that I never saw them until they moved..and neither did Frank. He and I picked our way through the ever-deepening snow and moved in a northwesterly direction towards the tallest peak in sight. At times the snow was only a dusting and rocks below were still clearly visible. Draws along the slopes were filled with several feet of snow in places, and these couldnt be avoided, so both Frank and I waded through as best we could.

The sun was shining brilliantly by then and the gray clouds were far, far to the east by the time we completely emerged above timberline. The wind was pretty stiff, and I could see gusts of snow billowing off the cornice up above. Wind in these parts is almost always westerly, and I was sheltered for the moment on the sunny eastern slope. I managed to get past a few pretty sketchy steep areas where the snow was absent but the rocks were glazed with a clear and treacherously smooth coating of ice. Since there were no trees around, I was especially worried about starting to slide since there was not much to stop a slide for several hundred feet. All part of the adventure. I continued traversing the slope and making my own switchbacks up to the pinnacle of the ridge. Here and there windblown tussocks of grass poked out of the rippled snow. I could hear and feel a tremendous mass of air whistling over the top of the peak. We neared the top. Frank was pretty far ahead of me and ran over the top and disappeared from sight. I got a little worried since I had no idea what lay beyond and I trotted the last dozen yards after him. I found him at the top looking west at the miles and miles of rippling hills and rocks stretching off into the Mt Zirkel Wilderness near Steamboat Springs to the west. To the north lay the rolling plains of southern Wyoming and the Snowy Range far beyond. To the east there was now very little hint of heavy clouds on the horizon, and only sunshine streamed down on the forested slopes around Joe Wright Reservoir. The southern view was the most dramatic as I was able to look across the pass into the Lake Agnes cirque, with the towering Nokhu Crags to the east and massive Mt Richtofen to the south. Beyond lay countless thousands of jagged snow capped peaks stretching across Rocky Mountain National Park.

The wind howled and sent snow billowing like sand down the eastern slope. I quickly donned every warm piece of clothing in my pack. Frank and I found the peak elevation marker, although the cairn was buried in snow and all that could be seen was a heavy stick bowed nearly to the ground from the wind. We were basically on the edge of a very massive ridge stretching for perhaps three miles. At various points along the way, the ridge reached a sharp point, then fell again. There were three main points accessible without climbing down significantly from where we stood. We started off to the south and very shortly found a rugged rock outcropping that provided a welcome wind-break. Frank and I sat down and I had lunch, throwing Frank a few bits now and again. The sun reached its highest point for the day and we moved on to the south on the ridgeline. We reached the other two high points. After the most southerly point, the land falls sharply away toward the pass below and the thin strip of blacktop pavement snaking like a ribbon around giant rocks. 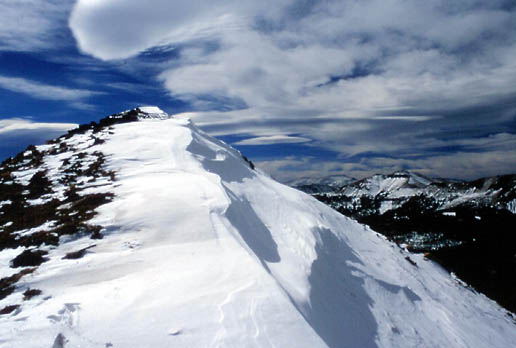 From the southerly point, we followed a gentler slope back towards the trees. Once sheltered from the icy blast that dominated up top, I was able to take off most of my warm stuff and sit for a bit and relax. I threw small rocks for Frank to chase and I almost napped, but was till too full of energy to do that.

We strolled slowly down, enjoying the snow and ice and trees and blue sky. As we entered the forest again, I looked back up to the ridgeline and could see that wind was still whipping things around viciously up there, though it was calm as a whisper in the trees. Now and again, I caught glimpses of swirling snow-devils perhaps thirty feet high reeling off the cornice and down the slope before petering out.

The last stretch of forest was very fun. Frank and I ran downhill for about half a mile, our footfalls padded by deep drifts of snow. The tree trunks threw long shadows in the afternoon sun and the weather was perfectly pleasant for a nice hike. Needless to say, we got back down in about a sixth of the time required to get up. Looking back up the slope, it was difficult to guess that it took so little effort to reach the top. Mountains always seem to look harder to hike up than they really are.

We hopped in the car and took off down the highway back to Fort Collins. I stopped along the way at two spots along the Poudre to try fishing, but got no luck. We also stopped at Youngs Gulch and hiked up the side of the canyon near the trailhead. It was steep and heavily fortified with brambles and mahogany that scratched my hands and arms. I sat up on the top of the ridge looking down on the trail and my gaze was met with the unexpected sight of a guy crapping in the grass behind a hill hidden from the trail. He never saw me and thats probably just as well. I sat up on a tower of rocks watching the shadows climb up my side of canyon wall. Soon the shadows overtook me and the deep orange light of the sun faded into a faint wistful red and by the time I made it back to the car, an energetic blue twilight was all that remained of the day.

If its ever a choice between going to work to earn money or hiking terrain like I did that day with weather like that, theres really no decision to be made at all. 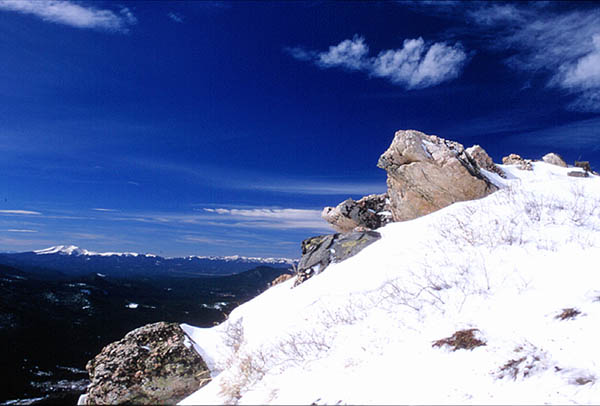 Prints and Digital Imagery from this trip location, and others,
are available for sale in the Colorado album at LandscapeImagery.com

Back To Hiking/Backpacking        NEXT